Griffin Linn Hits it Out of the Park

Unfortunately for Griffin Linn ’20, a bum knee prevented him from playing on the state bound Prep baseball team last spring, however, he did not let that stop him from contributing to the success of the program.

Griffin decided that he would lend his other talents to both the softball and baseball teams by constructing benches to be used in the dugouts of the Ray Whitlow Memorial Athletic Complex.  He said that he was looking for a way to stay involved and connected with the team.

Griffin developed a plan, created a budget, presented to the building and grounds committee and asked the Prep community for its support in raising the money needed to construct the benches.

His fundraising efforts included asking current and former baseball and softball families for donations. He also reached out to the broader community and contacted Tri-City Lumber to see if they would be willing to help. They generously discounted the materials so that Griffin could get closer to his goal of raising $1,750 for the project.

Along with the assistance and support of his family, friends and fellow scouts, Griffin has not only built the benches by hand, they are also hand-painted in school colors and include the Prep “P” on the side. 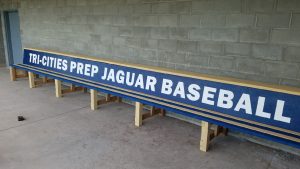 At the time of this post, Griffin is just $400 shy of raising the funds needed to complete his project. Anyone interested in helping with a cash donation, can email Griffin at linn.griffin@gmail.com.

Ultimately Griffin’s contribution to the team goes beyond offering a home run, or an RBI to a successful season.  It has become more than an Eagle Scout Award or a pat on the back for a job well done.  Griffin has left his mark on the program and is a perfect example of what service and dedication to one’s team and community looks like at Tri-Cities Prep!