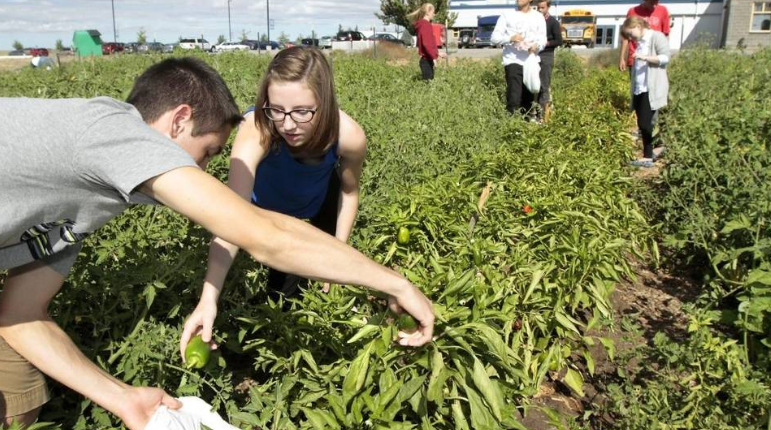 Alli Jacobs had never gardened before this summer.

The Tri-Cities Prep senior’s foray into horticulture came with lessons in hindsight, particularly when it came to the organization and spacing of the 40-by-60-foot garden on the private Catholic school’s grounds in west Pasco.

“We had to cut the tomato plants back so we could actually walk between the rows,” said Alli, 18, adding it took more than three hours to do the pruning.

But considering she also convinced numerous fellow students to help her care for and harvest the garden throughout the summer, resulting in more than 1,000 pounds of fresh produce donated to a local food bank, Alli and others at Tri-Cities Prep consider the project a success.

“I got to drop the produce off at the food bank sometimes and it was great to see how much was weighed in,” said senior Cesar Robles, 17. “Sometimes they were out of stock in the front and they took it straight up there.”

Prep students are required to conduct a community service project to graduate. Alli was inspired to grow a garden to benefit those in need by the school’s former athletic director, Raymond Whitlow, who died in a car crash at Snoqualmie Pass on Interstate 90 more than two years ago, she said.

She and the student garden club she formed actually cleared the ground for the garden on the day of service the school held in Whitlow’s memory in April ahead of an early May planting.

Everything that went into the garden was donated. The Master Gardeners with the Washington State University Extension of Benton and Franklin Counties helped plan the garden and the extension donated all the needed seeds and starter plants. A local nursery provided fertilizer. The school provided city water, as irrigation water is not available on the property.

Students provided the labor, from planting all the way up to harvest.

Kim Propson, a Prep math teacher and garden club adviser, said many of them didn’t know what to do at the beginning, some not even having a shovel they could bring from home to work with. But they harvested every day at the peak of production. A student was designated to visit the school each day to turn on the water and then return to turn it off.

“It’s almost impossible to help,” she said, because the students had everything organized so well.

All the produce, which included green beans, several varieties of tomatoes and peppers, cucumber, squash and pumpkins, was taken to the Tri-Cities Food Bank location in Richland.

Principal Arlene Jones admired the amount of work Alli and the other students put into the garden, especially the seniors who have their own community service projects to complete, she said.

She was particularly happy with how it pulled the school closer to the needs of the community, which is the whole goal.

“It’s not just about checking the hours,” Jones said. “We try to see transformation of the student.”

The garden only has a couple weeks of productivity left, at most, Alli said. While she won’t be able to lead the garden club next spring, she’s making arrangements for a new student or two to step in her place.

The garden’s location will also need to move. It’s located where Prep will eventually build its football field, and they want to add more variety to the planting.

But looking back over the garden on Monday after a lunch hour harvest and holding a large heirloom tomato that a student had found, she smiled.

“I was actually really surprised at how well it turned out,” she said.