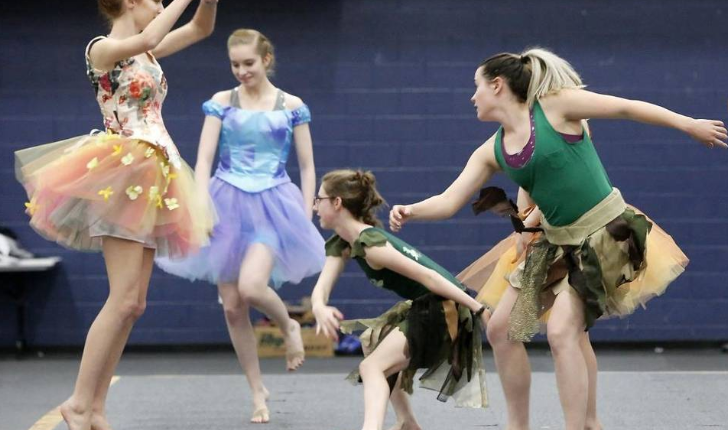 (The following was taken from a May 12, 2016 article in the Tri-City Herald. To see more media at the TCH website please visit: http://www.tri-cityherald.com/news/local/article77331312.html)

Hogan Jones and Gillian Gormley glided across the stage.

Rehearsal was over for the day, but opening night wasn’t far off and the teens were taking every opportunity to work on, well, everything — including their waltz.

They play Oberon and Titania in Tri-Cities Prep’s production of A Midsummer Night’s Dream.

The show makes its debut May 13.

It’s taken months of work to arrive at this moment, from auditions in January to tech rehearsals the last few days.

And the stakes are high.

Midsummer is a comedy, which means it’s lighter fare than, say, Othello. But, still, it’s Shakespeare.

So when 7 p.m. hits, Hogan, Gillian and about two dozen of their friends will have to juggle mouthfuls of “thys and “thous,” plus footwork and song, in front of what’s likely to be a sizable crowd.

Will they be ready? As the lights dim, will magic unfold at the Pasco school, or will the fantastical romp turn tragic?

Hang on. That’ll take a minute.

About 70 Prep students are participating in Midsummer in some way — close to half of the student body.

The actors are all students. The stage manager is a student. The costumes? The scenery? Students had a hand in all of it.

And they’re excited about opening night.

“I hope people come to the show and have a good time — that they’re happy they came and proud of the people on stage,” said Allison Jacobs, who plays the sprite Puck.

The Herald first met Stella and Allison during tryouts.

Stella, 17, a junior, was part of the audition panel, listening to students perform monologues and songs in hopes of winning a part. And Allison, 18, a senior, was charming her way to the role of Puck.

Both girls said they’ve gained a lot from being part of Midsummer and other drama productions at Prep.

Stella has found a passion. She was enlisted into stage management last year, when Prep students performed the original musical Guns of Ireland, penned by locals Mike Speegle and Jeffrey Payne.

The behind-the-scenes role fit like a glove, and — while she’d like to act in a show her senior year — she expects technical theater to remain part of her life for a long time.

“I’m hoping to maybe get into it in college,” she said. “This is the first thing I’ve found that I’m really good at.”

And Allison — she’s found confidence, on the stage and in herself.

She’s a veteran of several Prep shows. She’s deepened her craft, learned from her teachers and been part of something bigger than herself.

As Midsummer makes its debut, “it feels good to have come together, not just as a school but as a special community (within the school),” she said. “… I can’t help but smile to think my last play here will be with these people. The end result is just half of what we’ve done all along.”

Speegle and Payne, the creative minds behind Guns of Ireland, both are helping withMidsummer.

Payne is lending his expertise in lighting, and Speegle — a teacher at Prep — is helping with everything from performance to sets.

In the last few weeks, he’s watched something unforgettable unfold. “There’s a secret, invisible moment that happens every play. And these kids — they just crossed over it,” he said, as Hogan and Gillian waltzed.

The students have learned their dialogue, their blocking, their songs, their dances. And instead of reciting, instead of moving by rote, they’ve start acting.

Hogan and Gillian have found a groove with Oberon and Titania.

And, “when King Oberon and Queen Titania quarrel, nature and the mortal realm get knocked out of alignment,” Gillian, 17, explained.

Memorizing all the lines — it took a while, Hogan said. The dancing wasn’t exactly easy, either.

But they’re not merely reacting anymore. Things have clicked.

Like Stella and Allison, they both said it’s been rewarding to be part of Midsummer.

Gillian joked that a highlight is the chance to “wear pretty dresses.”

“I had to buy leather pants. Something I never thought I’d have to wear,” Hogan said with a laugh.

But then he got serious. He and Gillian are both seniors, but they only really became friends this school year, after they both took part in Prep’s fall production.

“Gillian and I became friends after Dr. Horrible,” Hogan said. “The theater program gives you an opportunity to talk to people who you might not otherwise. And it gets you outside your comfort zone, for sure.”

‘They can deliver it’

Mounting a Shakespeare production in the spring is a tradition that stretches back about a decade, started by Brett Powers and his wife, Nina, who both wear multiple hats at the school.

“I think often the feeling is that Shakespeare is too difficult for high schoolers. I understand that perception,” he said. “But after doing this for nine years, I know they can deliver it.”

Before long, they’ll get their chance. The clock will hit 7 p.m., and Hogan, Gillian, Allison, Stella and the rest will take their places.

Will they be ready? It’s a pretty safe bet.

But even if a line is flubbed, even if a dance step or a cue is missed, consider how far they’ve come.

Consider what they’ve made, in just a few months, together.