The Lady Jags made a name for themselves this year as the team to beat! They finished the season tied for 1st overall in the EWAC with a record 19 wins and 7 losses.  It was a season filled with many celebratory firsts for the young team:

1st Conference Player of the Year

Freshman Talia von Oelhoffen was named EWAC Co-Player of the Year and 1st Team while sophomore Alyssa Monteon was named 2nd team. With only one senior on the 2017-2018 team, you should expect to see some great performances and results next year as well!

The boys also had an incredible season with a 19-4 overall record and placed 2nd in the EWAC.  The team made it to the State Regional Round of 16 and senior Stefan Geist earned 1st Team All-EWAC, sophomore Kobe Singleton and junior Max Nelson were both name to 2nd team.

Stefan Geist was also selected to play in the WIBCA All-State Game.

Stefan Geist, Kobe Singleton, Talia von Oelhoffen all played for Team Tri-Cities in the SWX All-Star Media Classic where Talia was named “Player of the Game” as she scored 19 points and had 7 rebounds.

Congratulations to both teams and coaches! 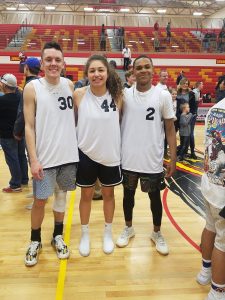 It’s Another Trip to State for Mock Trial