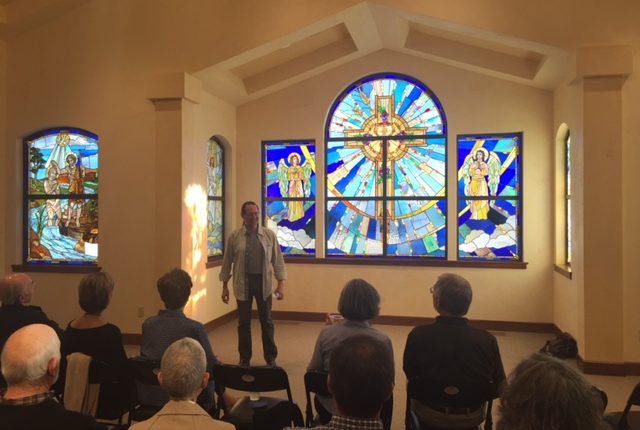 (The following was taken from a September 25th, 2016 article published in the Tri-City Herald by Kristin M. Kraemer):

Patrick Clark likes to refer to the 17 stained glass windows he made for Tri-Cities Prep as his “circle of life” project.

Raised in Richland until he was 14, the New York City artist has returned numerous times over the past 16 years to handle two separate installations at the Catholic high school in Pasco.

And now, Clark, 62, is taking part in a book that not only will document the history of Tri-Cities Prep, but the reason behind the windows and the role God might have played in inspiring him.

“It really was a long, hard journey making these windows,” he told the Herald. “It was a big production, it turned out great and (the students and faculty) love them. It’s a really precious gift to me.”

Clark spent this past weekend being interviewed and photographed for Legacy of Light, the book’s working title.

He took about six hours Saturday to identify and explain each special element that he put in each window. That ranges from the salvaged Tiffany and historic glass, geods, olivine, agates and shells he used, to the actual designs such as incorporating the Columbia River and Rattlesnake Mountain in the background of the window that reflects the story of the Prodigal Son.

“There is just an extraordinary amount of information that can be shared about what Patrick has created. It’s really a treasure,” said Nancy Roach, the school’s vice president for mission and education and Clark’s host for the weekend.

“The glass casts a beautiful color prism on the carpet throughout the day. It’s a great contemplative, sacred space for our kids throughout the day to come and be in touch with something greater than themselves.”

The stained glass has been a huge blessing for the school community, said Roach, but it needs to be shared with the broader community as well.

That’s where the book comes in.

Clark said this important art was a gift to the entire Tri-City community, and he wants all to enjoy it. He made the windows very special because it was liking coming back home, he said.

Clark, who went to Christ the King School in Richland, described himself as “so un-Catholic” when he was younger. He was a teen when his family moved to Vienna, Austria, so his dad could work for the International Atomic Energy Agency.

He returned to the Northwest to attend Washington State University, and after graduating opened a stained glass shop in Spokane. It was while volunteering with a local parish on its capital development program that Clark became friends with the lead fund-raiser from Mineola, N.Y., and that led to a job in Rockaway Beach.

Clark was visiting his mother during Christmas 1999 when they saw a gift wrap table at the Columbia Center mall with some students from Tri-Cities Prep.

The school opened the year before and Clark, excited to see a Catholic high school had been built in his “motherland,” offered to do a window. His only requirement was the student had to help cut the glass and solder the round window.

“The Unity Window” was installed in the school’s main entrance in 2001.

School staff reached out to him again when the chapel was built, and invited Clark to bid on that job. He was hired.

Clark started on that project one month before Hurricane Sandy hit and his Sunlites Stained Glass studio in Rockaway Park was flooded with 6 feet of water. It took him a while to get the studio back in order, but eventually he completed the seven sacraments and related windows with Madonna and Child, Michael the Archangel and St. Thomas Aquinas.

The Eucharist window behind the altar is the biggest at 12 feet wide, while most of the others are 3 to 4 feet wide and 7 or 8 feet tall.

The windows were shipped 3,000 miles across the country in crates, and installed over a year.

“I have tons of pictures, but the really cool thing is coming out this weekend and walking into the chapel and seeing it in real life,” Clark said. This is the first time he has done a full chapel with only his work. “It looks so much cooler than the photographs. It’s just a gift to be present.”

Roach said the 9612 St. Thomas Drive school doesn’t yet have volunteers that can give public tours through the chapel, but said people are welcome to call the school 509-546-2465 and arrange a visit after hours.

She said the book idea came from a Leadership Tri-Cities class that saw the windows and thought it was important to have a publication showcasing the stained glass and Prep’s history. They are looking for a publication date in 2018.

The book’s title, Roach said, “reflects not only on Patrick’s legacy or his gift to the community, but also on the legacy of our faith and the light that both these windows and our faith bring to the community.”

From the President of Tri-Cities Prep